First year at Uni is quickly coming to an end. It's been quite a few months. Meeting some lifelong friends along the way, this academic year has been an amazing journey. Learning so much and gathering invaluable skill sets throughout.

Coming to Uni was a big thing for me, I've seen Shaun (my older brother) through a degree and also a lot of friends back home and abroad have also studied. Coming out of the other end, everybody just seems that little bit more worldly. Things don't surprise then, they've seen it or they understand it. They may not have all enjoyed Uni, but it certainly molded them into different people. Me on the other hand, I'm here to enjoy it and take everything that I can from it. Jumping at opportunities and putting time and effort in around these parts seems to be paying off.

Me, Rob Werran and Nick Shimwell have been attempting to find as many species of flora and fauna on our campus as possible. We're motivated by the 1000 species in 1km challenge. We know we won't get anywhere near this, not only due to lack of time spent on campus, but also lack of knowledge when it comes to the creepy crawlies and plants. We're trying though, using various methods.

We've joined hedgehog trackers, torched and seen bottle trapping of newts, sweep netted for inverts, traced foxes, we're operating a moth trap when possible and we're always looking and listening for birds. The latest count of species is around 225 for the year, many of which are lifers for all of us. We've recorded 83 Species of bird. Highlights including Goosander, Red Kite, Raven, Golden Plover, Glossy Ibis and Kingfisher.

Below are some of the moth highlights thus far.


Aside from the Brackenhurst 1000 in a 1km, birding has been decent elsewhere too. A visit home in early April produced Osprey on the Mere along with the Arctic Skuas past Rossall, Sherwood forest has been nice with Crossbills and Siskins everywhere. Grizedale was nice too with Raven, Crossbills, Marsh Tit and Willow warbs en masse.

This last weekend things were pretty good. With a blocking pressure to the south lifting migration seemed to flow a little better. Little gulls and waders were picked up elsewhere in Notts in the morning and after a brief shower around midday my mind was made up, it was time to go birding.

Hoveringham railway pits was the first port of call. Me and Rob left Nick revising and arrived at the pit, leaving the car I could hear Whitethroats everywhere, maybe a small fall was happening. We ambled along the pit scanning and counting the ducks as always. Yellow Wags called from the nearby fields (which reminded me more of Sweden than England, up North they're not that common). Scanning through the Black-head colony hoping for a Med gull or a little gull when I saw a Black tern bobbing in the background. Stunning birds as always and a scarce inland passage bird, it felt like justice after hours of lifeless birding and whacking of bushes. News was put out to local birders and all the patch guys got it, which was nice. We exchanged niceties with the patchers, discussed the sailing pits (where they had been all morning) and decided we'd have a quick look there before beating a hasty retreat to get some reading done, serious students us you know.

Arriving at the sailing pit common terns where displaying and I had a very brief scan to try and pick out an Arctic which had been there moments before, as is often the case with migration, the tern had left. Probably following the Trent, as many birds do. A tiny white tern was fighting the wind out there though, just as Pete (a patcher) was about to leave, I got it in the bins. LITTLE TERN. Not a mega by any stretch of the imagination, go to any breeding colony on a beach and you'll surely have great views, but for a patcher, and I consider Hoveringham my patch down in Notts, they really are a special bird. Below are a few record shots of the Little tern and a Google maps image of Hoveringham pits in relation to the coast (43 miles at it's closest point).

I can't wait to see what May has in store, other than end of year exams. 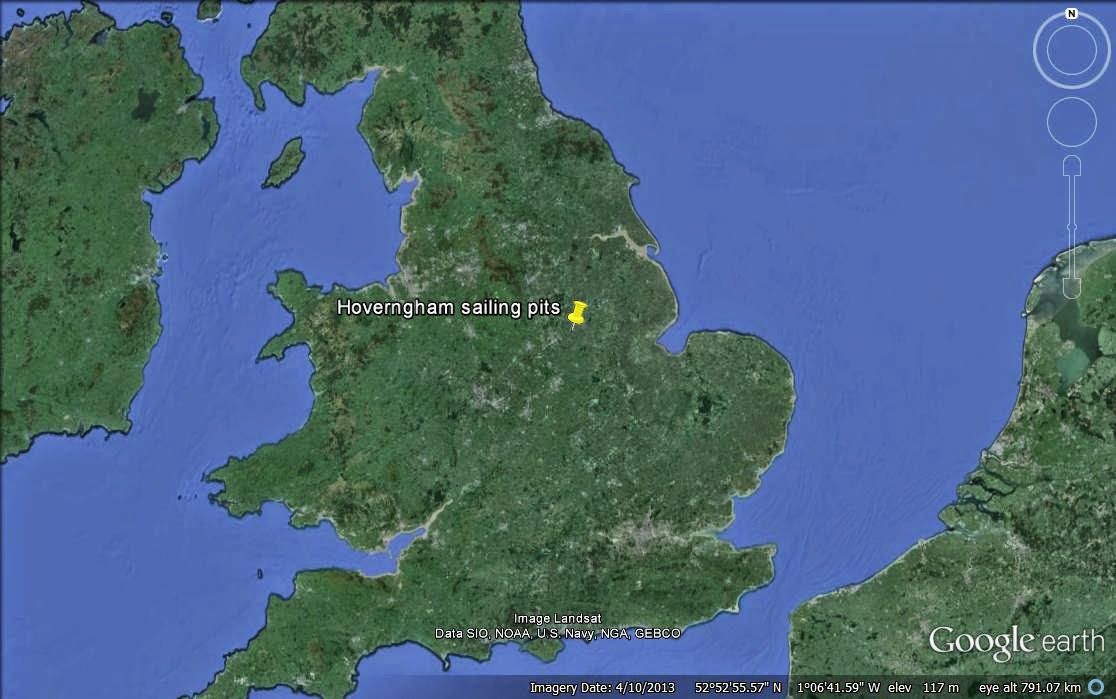